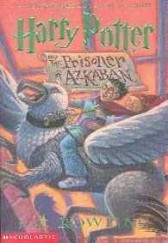 (NOTE: while this post is current, scroll on the sidebar —in a separate tab or window—to click to listen to Hedwig’s Theme while reading 😀)

Don’t you just love when, as a book’s “passenger,” you never want the ride to end? I and thousands of readers agree that J. K. Rowling’s writing style grabs your imagination and emotions by the collar, straps you in its seat and won’t let go! Thanks to Sheila at Book Journey, I’m on that ride again 🙂

Harry Potter and the Prisoner of Azkaban, is the third leg of this thrilling “roller coaster” ride. We’re filled with expectation as our author ushers us in with another packed carful of characters. She flips the switch, the cars lurch and we start off slowly, with Vernon Dursley’s sister, Marge, who’s every bit as horrible as he is. Her opinion of Harry is that of a dog, and a mangy one at that, ultimately pushing Harry over the edge. As a reader, we feel as satisfied as Harry in justice having been served when so well-deserved! 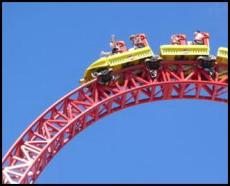 The anticipation rises with an exciting turn, taking our first trip on the Knight Bus with Stan Shunpike and Ernie, where we get our first glimpse of the criminal, Sirius Black. The coaster car climbs its first peak as we board the Hogwarts Express and encounter the dreaded Dementors. We dip when hearing of the Grim, through the mysterious and foreboding words of Sybil Trelawney, Professor of Divination, which, according to Professor McGonagall (and Hermione) is “one of the most imprecise branches of magic.”*

Getting to know Professor Lupin is a high point, for sure, with his approach to teaching the Dark Arts being not only practical and beneficial—but amusing! He takes Harry under his wing, and as we get to know him, we can’t help but find Lupin endearing. Our imaginations scream with hands held high when the Weasley twins introduce Harry to the Marauder’s Map (its history never revealed to movie watchers, by the way!), and our dreams spin at the the thought of having a Time-Turner!

The chapters that really raise our adrenalin with “triple-loop” excitement and peril are those which hurl us into the bowels of the Whomping Willow. Back story is revealed in such riveting ways, our blood pumps fiercely with the many twists and turns, making this book the one that takes this ride to a new level. The tug on our heartstrings grows stronger, our curiosity piques higher, and with the ever-increasing threat of Voldemort, we eagerly and anxiously get on line, ticket in hand, for the next thrill ride: Harry Potter and the Goblet of Fire…

Have you read this book? How was your “ride”?

* I do not advocate any form of “magic” or “fortune telling,” outside of fantasy fiction.