If there’s one thing I feel very strongly about—it’s bullying. I hated it when I was a kid, even more when my son was in school (I wrote a poem inspired by an incident that involved his friend), and I witness it on a daily basis, especially now. Bullying takes forms in countless ways, and not just by kids or on school playgrounds, that’s for sure.

Unfortunately, we live at a time when this abhorrent behavior is actually encouraged by some, so it’s that much more important to address the subject in ways that have the best chance to have positive impact. That’s why I was thrilled about Darlene Beck Jacobson’s middle grade novel in verse Wishes, Dares & How to Stand Up to a Bully.

As a gifted author, Darlene captures with such authenticity, the thoughts and feelings of 11-year old Jack and the essence of life in the 1960s (I lived through them, so I know!). From the first page I instantly fell in book-love with him, the characters and setting, and became so immersed I was barely aware of the pages turning as I eagerly ventured through Jack’s story.

Written in impeccable verse, the format allows for brief, poignant scenes that artfully tug at your heartstrings. Though it takes place in a simpler time when activities weren’t tech-driven, the primary subject matter of bullying is more timely than ever. It is addressed in a very effective, non-didactic way offering the type of resolution that could have the kind of influence and benefit one would want from a middle grade novel. The reader could come away with…

“The knowledge that sometimes

in order to help yourself,

you have to help 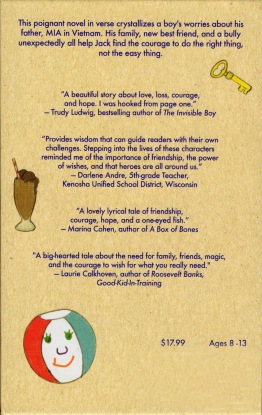 “Wishes” takes place at the end of a school year in the early 1960s, when 11-year-old Jack learns that his father, having been deployed to Vietnam a year before, is now Missing In Action. Jack, his mom and younger sister, Katy, will spend the summer with Gran and Pops, his dad’s parents—and Jack doesn’t wish to be there. All he wishes is for his dad to come home.

Jack doesn’t know he will befriend Jill, a special girl whose brother not only bullies her, but will bully Jack too. He also doesn’t know how careful one must be when making wishes—granted by a fish—because they can go horribly awry. What he does know is that he cares about his dad, his family, and Jill. Unexpectedly, he will also come to care about things and people he never would have thought.

Darlene’s first novel, Wheels of Change, blew me away, so I knew I was in for a treat with “Wishes.” She did NOT disappoint! In my opinion, this is a book that should be read in every classroom, library and home. It’s that important. It’s that good! And I’m VERY excited about following her blog tour; she posted on her blog the schedule and the fascinating contents of each post from March 9th through April 21st!

You can pre-order/order Wishes, Dares, and How to Stand Up to a Bully at: