(NOTE: while this post is current, read it on its own page, then on the sidebar (opens in separate tab) scroll to click to listen to Hedwig’s Theme while reading 😀)

This being my 4th time reading this series, who would’ve thought I’d read Harry Potter and the Deathly Hallows with pronounced hunger? I knew I’d enjoy it and read ahead of my reading schedule to be done before Sheila’s ReRead-along time frame (now complete), but I finished much more quickly. Even knowing how things turned out, I still found it to be a page turner! What cracked me up is that I still had that “I don’t want the ride to end!” feeling lol To me, this says a LOT about the talent and genius of J. K. Rowling and her gift to us in this way 🙂

If you read my previous post, you know about how my “Theory Monger” friends and I theorized in the Barnes & Noble University “Half-Blood Prince” online forums and created our own group to continue the journey as the whole “Harry Potter” community feverishly anticipated the release of the last book of this amazing series. As I assume you’re aware, the worldwide phenomenon that surrounded this story had sparked elaborate book release parties at bookstores around the world. I’d never attended any of them, but was very amused by the creativity of the booksellers and certainly of the avid fans, many of whom dressed “in character.” Being the end of the series I made the decision to attend, wanting to experience it before it was over, and now I want to share it with you 🙂

By the time the big day (July 20, 2007) arrived, I had a game plan. Since my local Barnes & Noble couldn’t open past midnight (a town ordinance), my destination would be the B&N in Clifton, NJ. It was my first stop of the day and when I arrived minutes after the doors opened, there was already a line at the desk where you’d obtain the number which determined your place in the queue to pick up your reserved books after midnight. If I’m recalling correctly, mine was in the low 100s. I had reserved a copy for me, one for Pavlo (my now grown friend who, when he was a young boy, introduced me to the books in 2001), one for my [now] daughter-in-law, Suzanne, and one for her mother, Cynthia. 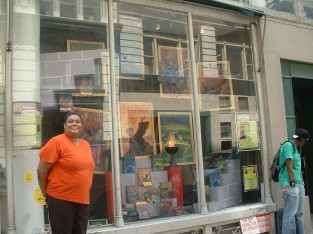 With precious queue number in hand, I left New Jersey and headed through the Lincoln Tunnel to meet my “Theory Monger” friend, Saundra. She used to live in Manhattan and returned for the release, so we arranged to meet that morning at the renowned bookstore Books of Wonder. (This is Saundra pictured at the storefront.) What a joy it was to finally meet one of my “HP” pals in person! It was the PERfect way to begin this extraordinary day 😀 I’d brought my face paints and “Harry Potter” charts to adorn her cheeks and arms for the occasion, which I did while we sat and ate goodies in the store, though these pictures were taken later in the day at B&N (click on images to enlarge):

After browsing the shelves at Books of Wonder (they have a wonderful collection of classic collectibles there), we walked up to the Union Square Barnes & Noble location. I had NO idea I was about to enter the world of Harry Potter! You are about to enter it, too, as a virtual experience through my pics below, all of which you can click on to view larger 😀

Upon entering, hanging from the ceiling—owl posts! 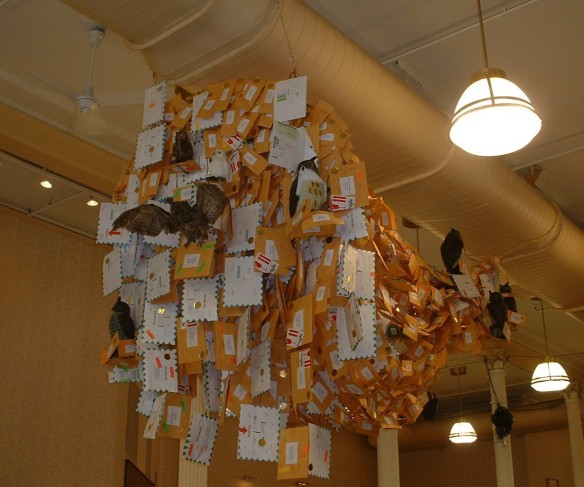 To the immediate right, in one of the storefront windows, a Hogwarts facade with the countdown clock:

Also to the right along the wall, the welcome desk/wristband check-in:

The itinerary handouts and instructions for those who would attend the midnight release party:

To the left, the cashier area was set up like Gringotts! 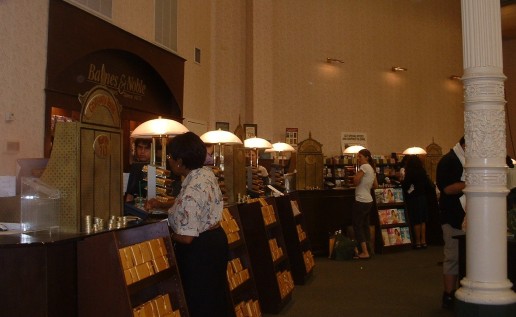 The artistry was superb throughout the entire store. Great craftsmanship! They chose Vault 713 from “Sorcerer’s Stone,” the one containing that precious item I won’t mention here for fear of spoiling:

The directional signs on the first floor: 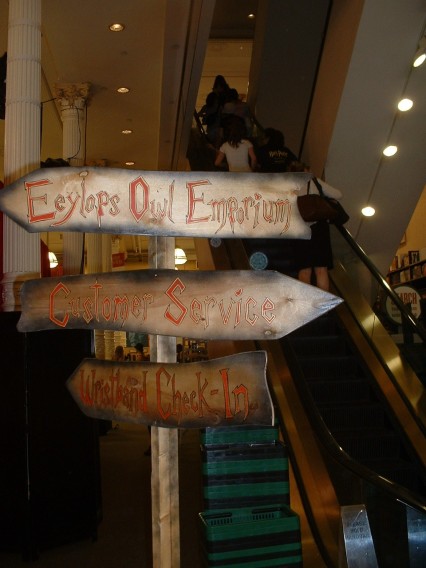 The second floor was packed with stations considering it was “Diagon Alley” 😀 :

The Apothecary (and for some reason I have no pic of Ollivanders sigh): 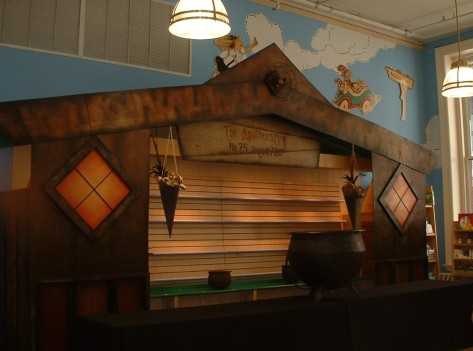 The 3rd floor brought you to “Hogwarts Castle” where first you came upon The Dining Hall: 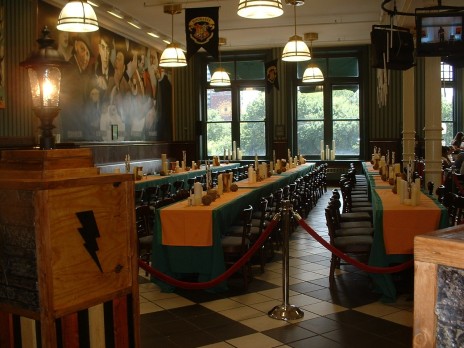 And beyond to The Forbidden Forest in which there was a talking tree 🙂 : 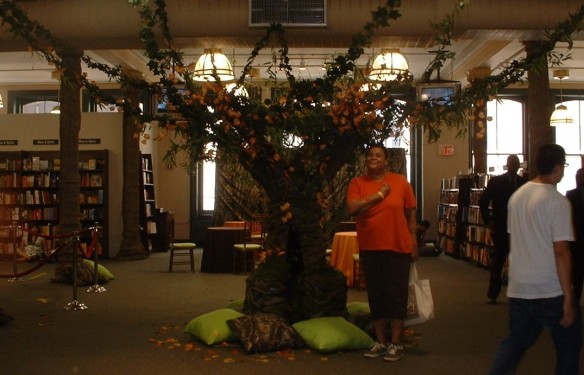 In our travels, we came upon a wizard:

And ran into some bookselling Quidditch players:

Then finally, moving to the 4th floor, we entered the realm of “Yule Magic” where much of the festivities would take place that evening, such as trivia, a costume contest and Jim Dale reading excerpts from the first 6 books, then his leading the countdown to the midnight release of “Deathly Hallows” (Yayayayayay!!!) :

A bit after 2 p.m., Saundra went off to join friends with whom she would attend other special events going on in NYC, then onto a release party. I headed back to New Jersey to set up camp early at the Clifton B&N (brought book work, etc., plus face paints and charts), before most of the crowd would arrive; I wanted to secure a good table and seats in the cafe that would allow for all four of us (Pavlo, Suzanne and Cynthia would arrive much later) to sit comfortably for the night. I offered to paint anyone in the store who wanted it, and was able to get in several B&N employees before I was told I couldn’t do it on premises. Outside by the windows, I painted a few HP fans, including children, but was told that was no good either. Oh, well 😦 Here we have two friends who’d arrived at the crack of dawn to get on line for their numbers. I was glad I got to make them happy with painted tattoos, but wish I could remember their names!

As the evening wore on, the crowd started to build—along with the excitement and a never-ending line in the cafe… 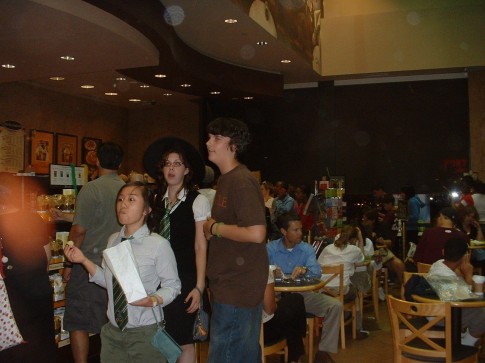 …and pretty much every inch and level of the store filled. When the time came, all eyes were on the store manager and the registers which lined the front wall (to the left, well out of view):

There were some great costumed attendees, some of whom I was able to get shots of. There were many little Harrys, Hermiones and Rons milling about, and here we have a Quidditch player wearing the Sorting Hat, Bellatrix and Hagrid: 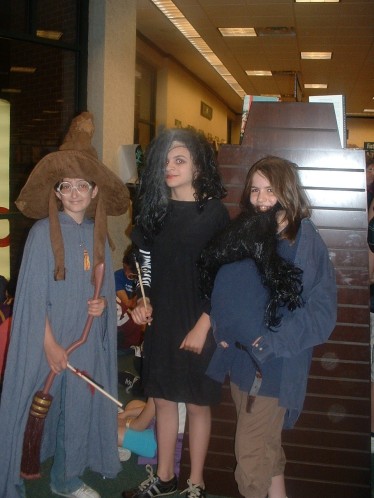 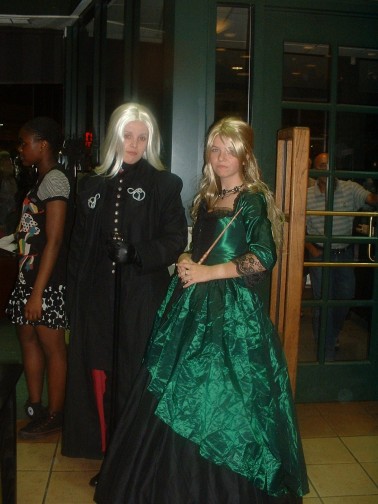 and none other than Snape!…

The anticipatory energy was almost tactile as if it tickled your skin, danced about your nostrils and tantalized your tongue, its palpability growing with every tick of the clock toward midnight. We all knew we were feeling an eagerness shared worldwide. Never before, and I highly doubt ever again, will the literary world experience such a phenomenon.

Mimicking hundreds of students filling the Hogwarts stands at a Quidditch match, as the countdown commenced the din rose, filling the space and when the clock struck “12,” the “snitch was caught” and the crescendo nearly lifted the ceiling. I almost expected to see someone soar overhead on a Nimbus 2000! I’m sure there are many who would’ve loved to wave a wand and shout “Accio, ‘Deathly Hallows’!” to avoid waiting one minute longer, but all was civilized and orderly 🙂 Now officially July 21st, the queue began, group by group, according to the number on one’s tag and my having gotten a low number, our wait wasn’t long. Every person there, from the readers to the cafe workers, booksellers and cashiers, wore irrepressible smiles as hundreds of volumes crossed the counter into waiting hands. You could see some people opening their books immediately while others, with their treasure clutched tightly, rushing out the door to hurry home and begin. With our books now in the bag, I scurried to hand them over, feeling much like Dumbledore awarding the Quidditch cup!

They were finally in our hands—the answers to countless questions, moments of deepest sorrow and joyous triumph. You could almost feel them seeping through the cover! Within hours we would learn the secrets that had been held back since the beginning—some hinted at, some a complete surprise. We would soon find out the fate of all the characters we’d grown to love and hate; who was “good” and who wasn’t, who would live—and who would die. Held somewhere within its pages the horcruxes would be revealed, relationships clarified, courage and cowardice displayed, and the significance of Harry’s eyes brought to light once and for all. There would undoubtedly be blood shed and, of course, Harry would either succeed in killing Voldemort—or die trying. We now had, in hand, a 759-page hardcover “ticket” for the final leg of a thrill ride we didn’t really want to end. We trusted that this remarkable author would not let us down and, at least for me, she more than satisfied what I longed for. I couldn’t have asked for more.

Thank you, J. K. Rowling, for the most magical literary adventure of a lifetime ❤