It’s hard to believe it’s been 1 1/2 years since I first drafted this post. It was almost a year before I actually launched my blogs! Now that there’s a break between posts involving ReRead-alongs, events I’ve attended and KidLit-related occasions to acknowledge, I can finally share with you this little celebration of a truly great talent:

In wanting to know a bit more about illustrators whose work I admire, I discovered to what extent author/illustrator Robert McCloskey’s work touched the world.

As a renowned author and illustrator, Robert McCloskey has influenced many in the field of children’s literature. Born on September 14, 1914, Robert’s childhood was spent in post-World War I America, in Hamilton, Ohio, with his parents and two younger sisters. His interests were of a creative nature, developing at an early age. Along with art, he enjoyed music, having learned to play the harmonica. He also had a penchant for inventing mechanical devices, which led his parents to encourage him to pursue a career in auto mechanics, believing art was not a viable way to earn a living. However, art won out.

In 1932, Robert won a scholarship to the Vesper George School of Art in Boston, then went on to study at the National Academy of Design in New York. He began his art career doing fine art watercolors, but quickly realized it was, in fact, a difficult way to earn a living. That steered him toward the field of illustration for children’s books. Initially, his portfolio contained paintings and drawings of fantastical creatures such as dragons and Pegasus. May Massee, the editor he met at Viking Junior Books, suggested he rethink his focus of art content. He then moved back to Ohio, at which time her influence led him to begin drawing subject matter based on reality. The result was his first book Lentil, about a Midwestern, harmonica-playing boy.

After Lentil was published, Robert returned to Boston, Massachusetts. In revisiting the Boston Public Garden, he noticed the problem ducks had making their way through traffic, and having heard stories about them was inspired to write Make Way for Ducklings, the 1942 Caldecott Medal Winner (and my personal favorite). His work was so beloved, upon his passing in 2003, Make Way for Ducklings was named the official state book of Massachusetts. Also, visitors of the Boston Public Garden can see the bronze sculpture of the famous mallard procession, sculpted by Nancy Schon. There is also an annual, philanthropic “Make Way for Ducklings” event hosted by Boston Babies, to benefit those in need. 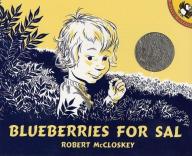 Having sometimes used his wife and daughters as models, during the course of Robert McCloskey’s illustrious career, he wrote and illustrated 8 books for children, including another Caldecott Winner (Time of Wonder – 1958) and 2 Caldecott Runners-Up (Blueberries for Sal – 1948; One Morning in Maine – 1952). He also illustrated a dozen books written by other authors, one written by his mother-in-law, Ruth Sawyer, which won a Caldecott Honor (Journey Cake, Ho! – 1953). Among his many accomplishments, in 1991, with President and Mrs. George H. W. Bush, he presented his “ducklings” to the children of Russia. Rightfully so, he was bestowed with the Living Legend medal by the Library of Congress, in 2000. 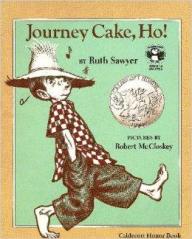 For additional information on the life and work of Robert McCloskey:

Wikipedia, which includes a full list of his children’s books with links 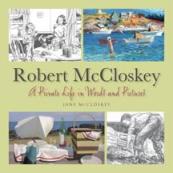 Robert McCloskey: A Private Life in Words and Pictures

by Jane McCloskey (his daughter) 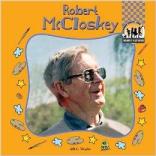 Have you read any books by Robert McCloskey? Do you have a favorite? How about a special memory attached to one or more of his books?