Born in England on July 9, 1713, at the age of 16, John Newbery left his home town and parents’ farm to work for a printer. So was his first step into the world of publishing. In 1737 he became co-owner of a publishing company. At that time, the books typically given to children were tedious and lesson-filled, or handed-down folktales written for adults. These were considered “tall” tales, so thought of more for children. Books such as Gulliver’s Travels and Robinson Crusoe were among them, though young children weren’t capable of reading at that level. Newbery eventually came up with the groundbreaking idea to publish books designed specifically for children by making the books fun to read. It was risky and he could’ve ultimately lost his business if the idea failed, but he was confident children would like them. He was right.

In 1744, Newbery created and published what is considered the world’s first children’s book. It had a very lengthy title, especially in comparison to the books in today’s market: A Little Pretty Pocket-Book, intended for the Amusement of Little Master Tommy and Pretty Miss Polly with Two Letters from Jack the Giant Killer. At that time, any book for a child would have to include a lesson of some kind, whether educational or moral. “Pocket-Book” included them all. The book was written and marketed partly with the purpose of encouraging children to see the benefits of good behavior vs. bad. It also included the alphabet. Each upper and

lower case letter had its own page, each with a rhyme and moral, though I wasn’t able to correlate why each rhyme was on its particular page. The book ends with a variety of fables, poems and proverbs. It was so popular in England, it was re-published in Colonial America. Then, in 1765, Newbery published his house’s most successful children’s book Little Goody Two Shoes.

(These 4 book illustrations were obtained through Wikimedia.) 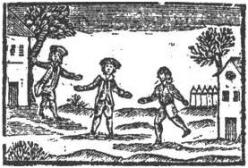 At the suggestion of Frederic G. Melcher, in 1922, the American Library Association established the first medal for children’s books. Due to the fact that John Newbery was the “father” of books published for children, it was obvious the medal should bear his name: The Newbery Medal. Not only did he publish the first children’s book, but he established children’s literature as a genre within the literary market, alongside adult fiction, nonfiction and poetry, of which Newbery’s company also published.

Books, in general, but especially children’s books, are my passion. If it weren’t for the innovative thinking and confidence of John Newbery, this beloved format may not have blossomed into what we know it to be today. I know I’m grateful 🙂 And, just as an interesting aside, a bit of trivia: while researching, I was especially interested to learn that it was in Newbery’s “A Little Pretty Pocket-Book”, the English game “Rounders” was first called “Base-Ball.”

As an aside, in 2013, when attending the New York Public Library’s event, “The ABC of It,” I had the pleasant surprise of seeing an original “A Little Pretty Pocket-Book”! Elation! 😀 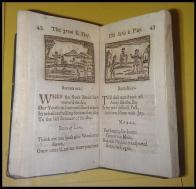 For up-to-date lists of: Newbery Medalist and Honor Books

John Newbery: Father of Children’s Literature by Shirley Granahan. Published by Abdo Group 2009. This is a well-written biography which contains many beautifully-rendered sketches and paintings, along with stunning photographs.

John Newbery and His Books: Trade and Plumb-Cake for Ever, Huzza! by John Rowe Townsend. Published by The Rowman & Littlefield Publishing Group Inc. 1994

24 thoughts on “UP!–John Newbery: The Man Behind the Medal”